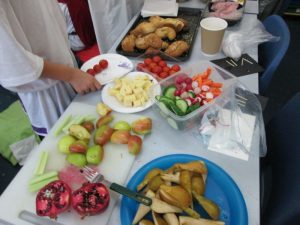 On 21st November Year 3/4 had a Roman Day. Their classroom became a villa for the day. They made mosaic biscuits and ancient Roman honey, Serpette. The class also practised marching in Roman formation and solved Roman numeral puzzles. At the end of the day they enjoyed a feast which included olives, dates and dormice!