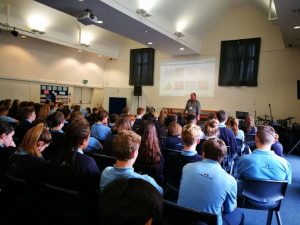 Since 1976, Christian songwriter, Paul Field has worked as a songwriter, composer, producer and performer in the UK and around the world. He has received an Ivor Novello Award from the British Academy of Songwriters and Composers and a Dove Award (and two nominations) from GMA in Nashville along with numerous other awards from ASCAP in the USA. He has had #1 chart success with his songs in the UK, USA, Holland, South Africa and Germany and has received many Platinum and Gold records for his work.

Much of his work today revolves around using songs and music (integrating where possible other creative disciplines such as video, dance and photography) to highlight Social Justice issues and explore how music can be used to explore our emotional responses to them.

In an  assembly with senior students, Paul spoke about modern slavery and  told us about ‘The Stolen Lives Project’ which he has written and produced in collaboration with The Wilberforce Institute at Hull University: www.stolenlives.c​o.uk  It was sobering to hear what is going on in the world but inspiring to hear what is being done to help.

In the afternoon he led a songwriting workshop with the GCSE music class and a number of other senior students who are interested in music.